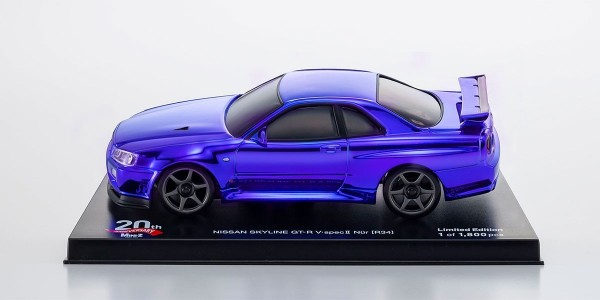 The palm-top size MINI-Z series celebrated a 20-year anniversary in 2019. Just as chassis technology has evolved, so has body finish quality with shaping, painting and polishing. The ‘Auto Scale Collection’ provides the ultimate presentation of the MINI-Z with high quality injection molded bodies. This model enhances the front face and rear section of the first Nissan Skyline GT-R R34 version released in 1999 and revises the signature ‘bayside blue’ color scheme of the R34 to a ‘chrome blue’ to capture the R34’s aura of cool power.


Each stand is printed with “20th Anniversary” and “1,800pcs” to mark the limited release production. On the reverse side of the graphical background mount, a timeline of MINI-Z history is displayed.


Kyosho has released famous cars from Japan and around the world from racing cars, popular street cars, and SUVs as officially licensed products. Is there a special car that you own in this range? We hope that this limited release ‘Auto Scale Collection’ body will become part of your collection. 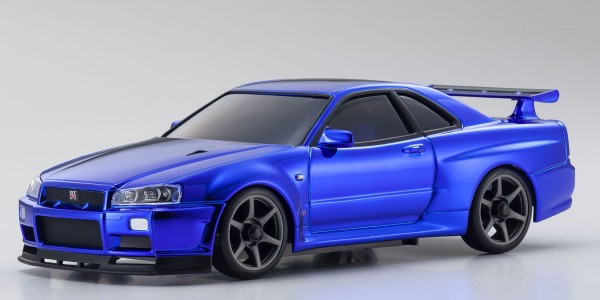 In 1999 the BNR34 model was the fifth generation Skyline GT-R. After this model, the R35 and Skyline became separate models so the BNR34 was the last ‘Skyline GT-R’. 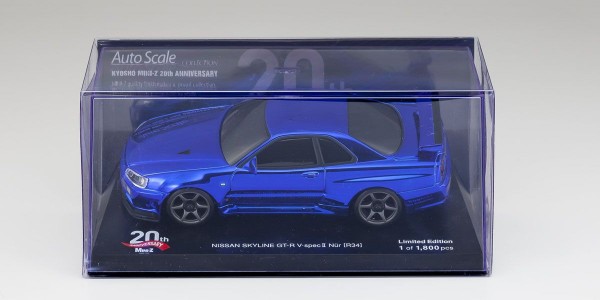 "20th Anniversary" and "Limited quantity 1,800pcs" are printed on the base of the Auto Scale Collection, to mark the special significance of this model.